WARNING
Using the Visibility property for an element is consider an Advanced Use when Editing Emails and should be carefully considered and documented appropriately.

Visibility Conditions use simple logic expressions for rendering an element inserted into the editor. This is most commonly seen when Editing Emails and is represented by an "eye" icon at the right-side of the element. 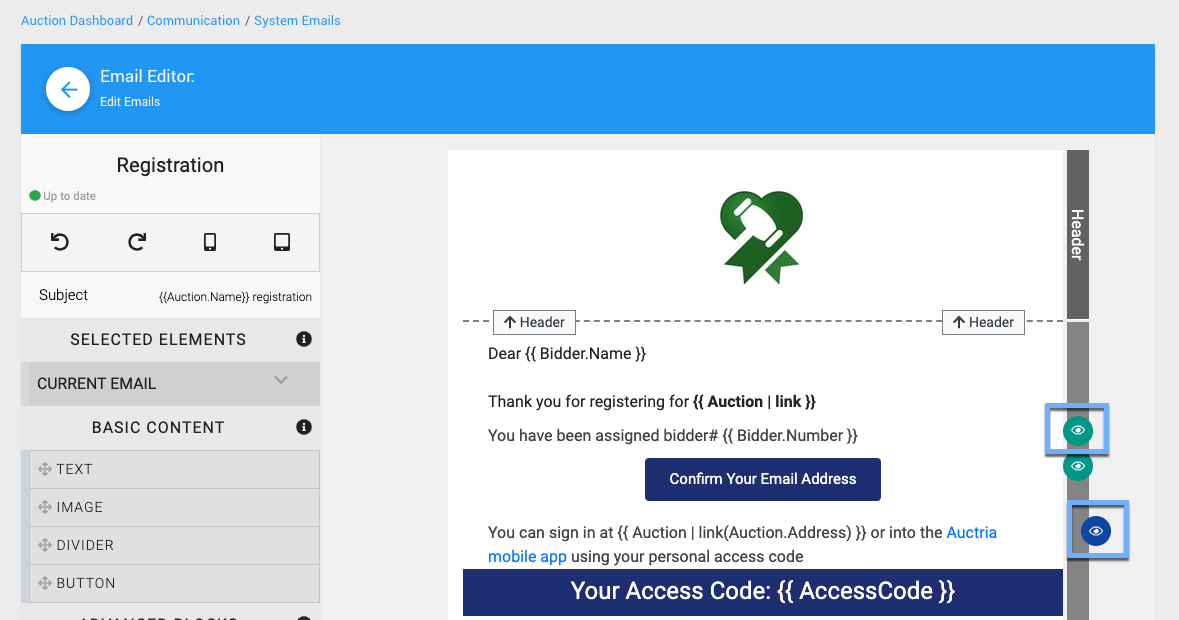 An example email showing the visibility icons when in "edit" mode.

An example showing what visibility condition is being used when hovering over the "eye" icon.

The Condition Statements used for the Visibility property can be considered conditional if statements. Where the condition being tested is either true or false. Essentially, if the condition is true the element will be visible and/or rendered appropriately based on the condition used.

If a Variable Only Test is being performed it is testing to see if a value exists for the variable. The actual value itself is not relevant to the test, only that the value is not null (or no value). If there is a value associated with the variable, the conditional test will return true and the element will be displayed.

The screen snippet above was taken from the Bidder registration/purchase receipt System Emails. The conditional test is used to display the Divider element on the page.

Tickets and Dividers have no specific connection although you can use the HasTickets variable all the same as it is tested outside of the context of the element itself.

The default is to test for true statements although you can test for false statements by prepending the code-base variable with the logical not symbol ! (exclamation mark). For example, !HasTickets would display the element if the bidder did not have a ticket for the event.

When writing a Variable Value Test you still need to phrase the condition so it can be evaluated to a true/false resolution. As an example, to test if the variable is 0 you would specifically state variable_name === 0 where variable_name is an accepted code-base variable.

To Test Multiple Variables in the same condition statement you would use the logical and && (two ampersand symbols) to add each code-base variable into the statement.

Most programming "logic" operators can be used with Visibility Conditions by themselves or combined as needed.

This is a current short list of Code-base Variables you can see in action.