The Linking Bidders functionality requires all bidders have Bidder Numbers assigned as it is the key index used to link the bidders in Auctria.

The Link Bidders function is intended to connect two bidders, often time as a "couple". It will change the bidder# of the second bidder to be the same as the first bidder. Each bidder will continue to have an individual record that contains their unique information such as their email address, telephone numbers, etc.

Merge Bidders and Link Bidders are available under the Bidder Details page. 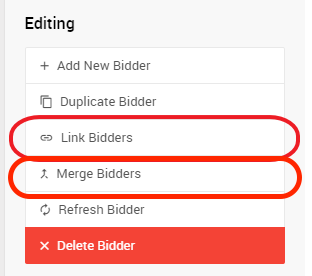