In Auctria, you can Link Bidders that will share the same Bidder Number but each have their own Bidder Record to log in with and have all of their online purchases, donations, and won items listed separately as well as their own contact information and registered credit card details.

NOTE: All purchases, donations, and won items are listed on the single Bidder Statement that is available for the Bidder Number.

You can also Merge Bidders, as needed, to clean up your bidder list to, for example, remove duplicates records or bring together Bidder Records where the email address may have been entered incorrectly on one.

The Linking Bidders functionality requires all bidders have Bidder Numbers assigned as it is the key index used to link the bidders in Auctria.

You can Link bidders from the Bidder Check-in dashboard or from the a Bidder Record. 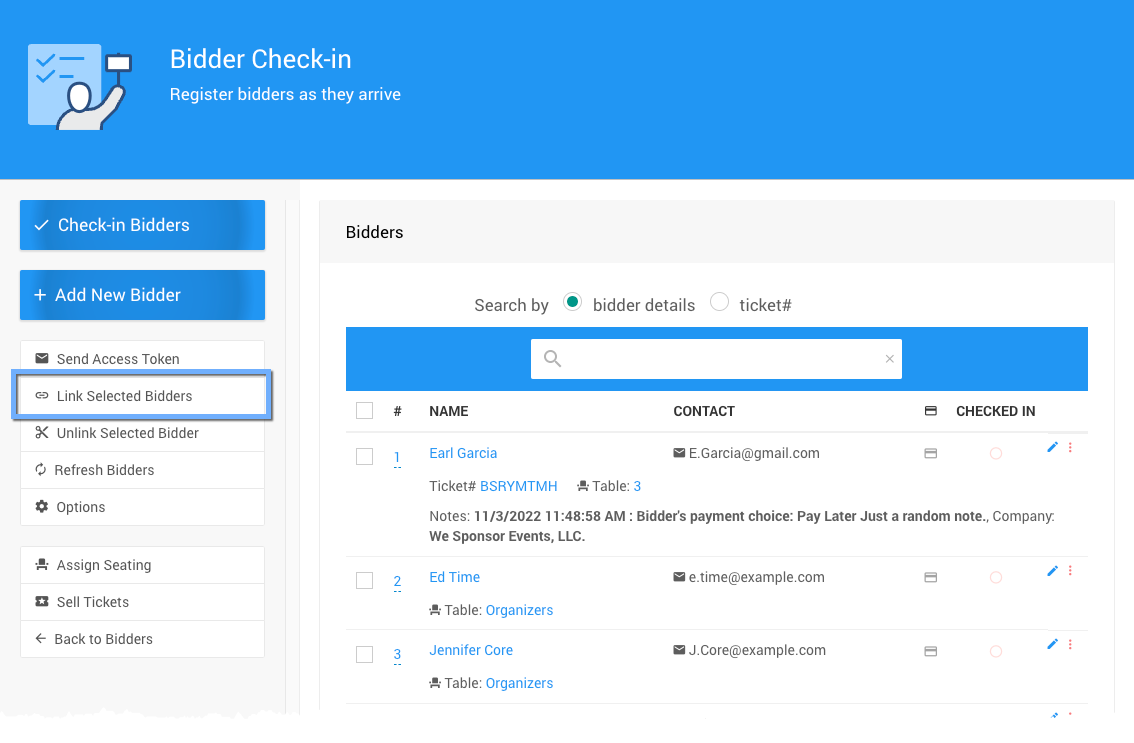 An example taken from a demonstration event.

If you wish to Link two bidders when they are checking in, simply check the appropriate box beside each bidder and then click the Link Selected Bidders Actions button in the sidebar menu.

Clicking the Continue button will complete the process and link the bidders. 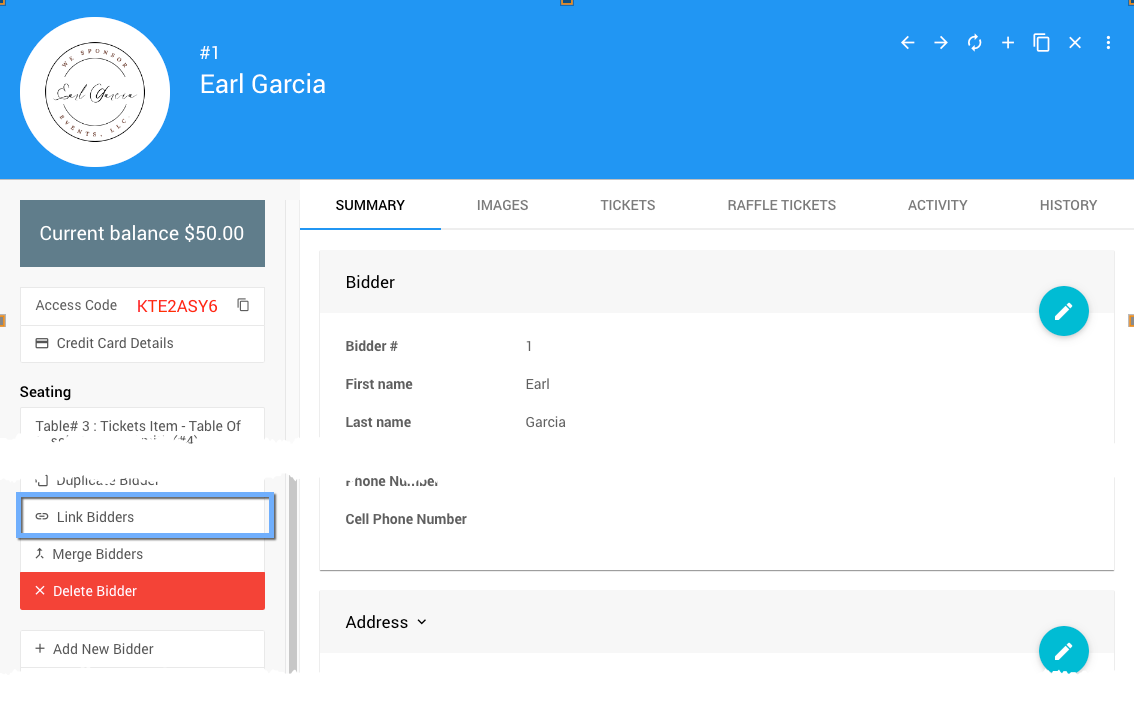 An example showing the Link Bidders "Editing" option for a demonstration bidder.

Clicking on the Link Bidders Editing Action will open a pop-up window to select the bidder you want to link to the bidder record you are reviewing.

An example showing the Link Bidders pop-up window for a demonstration bidder.

Selecting a bidder using the drop-down selector and clicking the Link button will give a "Last Chance" confirmation to link the bidders as this is a far-reaching and not exactly reversible.

An example showing the final confirmation to Link Bidders.

After linking the bidder to the "primary" bidder their bidder number will no longer be used and should not be assigned to another bidder going forward especially if any activity was originally recorded to the Bidder Record.

You can Unlink bidders from the Bidder Check-in dashboard or from the a Bidder Record. 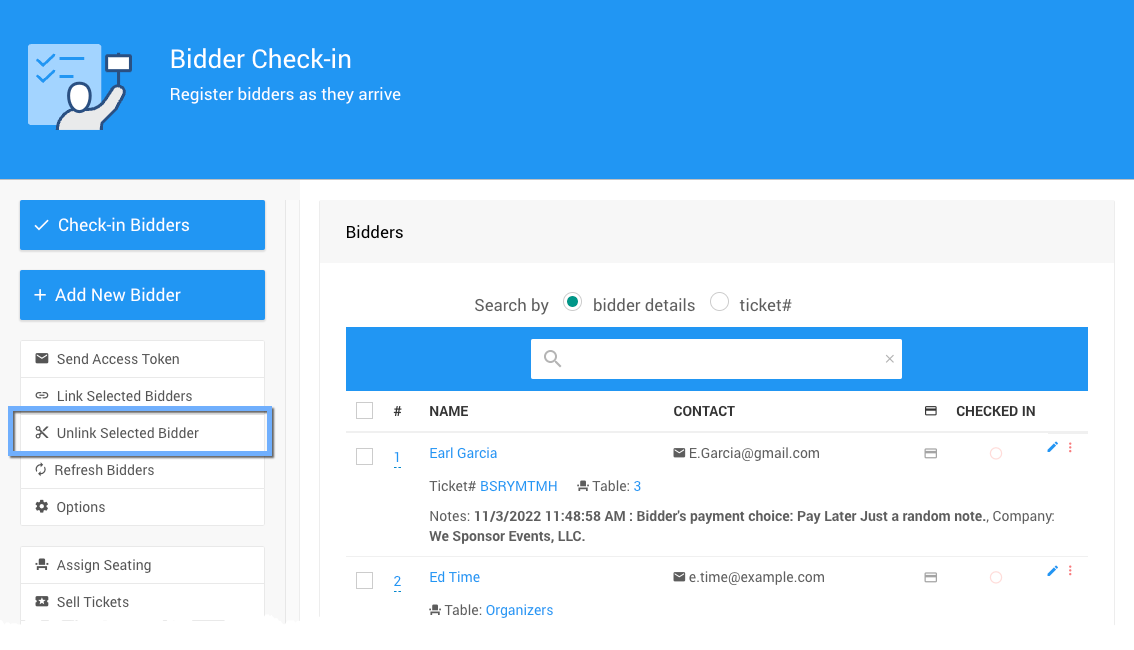 An example showing the Unlink Selected Bidders "Action" for a list of demonstration bidders.

The Unlink Selected Bidders Actions button in the sidebar will separate the selected bidder and create an appropriate bidder record for the newly unlinked bidder.

Only a single bidder can be unlinked at a time.

The unlinked bidder will have a new Bidder Number assigned based on your configuration choices with the default being to add an automatically generated number following the Next assigned bidder# value currently set.

To Unlink The Selected Bidder click on their respective checkbox and then click the Action button to trigger the process.

Clicking the Continue button to complete the process. 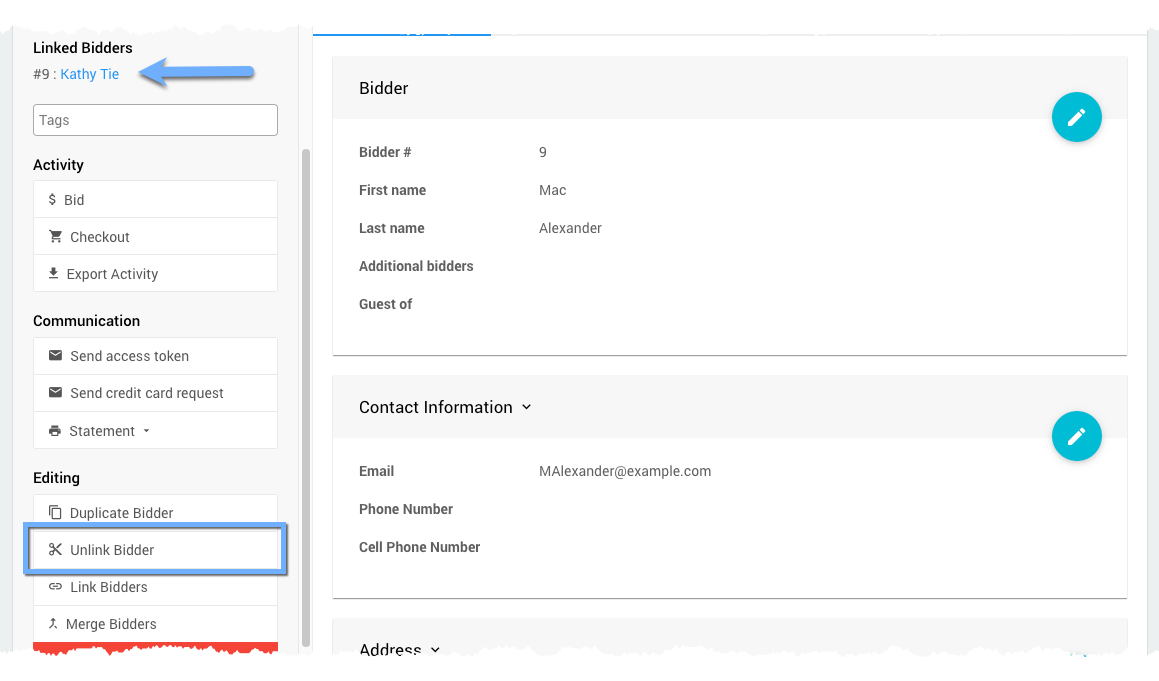 An example showing the Unlink Bidder "Editing" option for the example linked bidder above.

Once a bidder has been linked to another bidder, their Bidder Record will show the primary bidder's Bidder Number as well as a list of the Linked Bidders using this Bidder Record/Number.

Also to note, you can continue to Link Bidders from any of the bidders linked to the "primary" bidder using the Link Bidders Editing Action (see above).

Clicking through the Unlink Bidder Editing Action will pop-up a confirmation window specifying the current bidder being unlinked from the current Bidder Record.

Clicking the Continue button will complete the process and unlink the bidders. A green success banner will be shown temporarily across the top of the page and the unlinked bidder's record will be displayed.

An exception to not re-using bidder numbers of previously unlinked bidders is to only re-use it after unlinking the bidder if their "old" Bidder Number is still available.

You can Merge bidders from a Bidder Record. 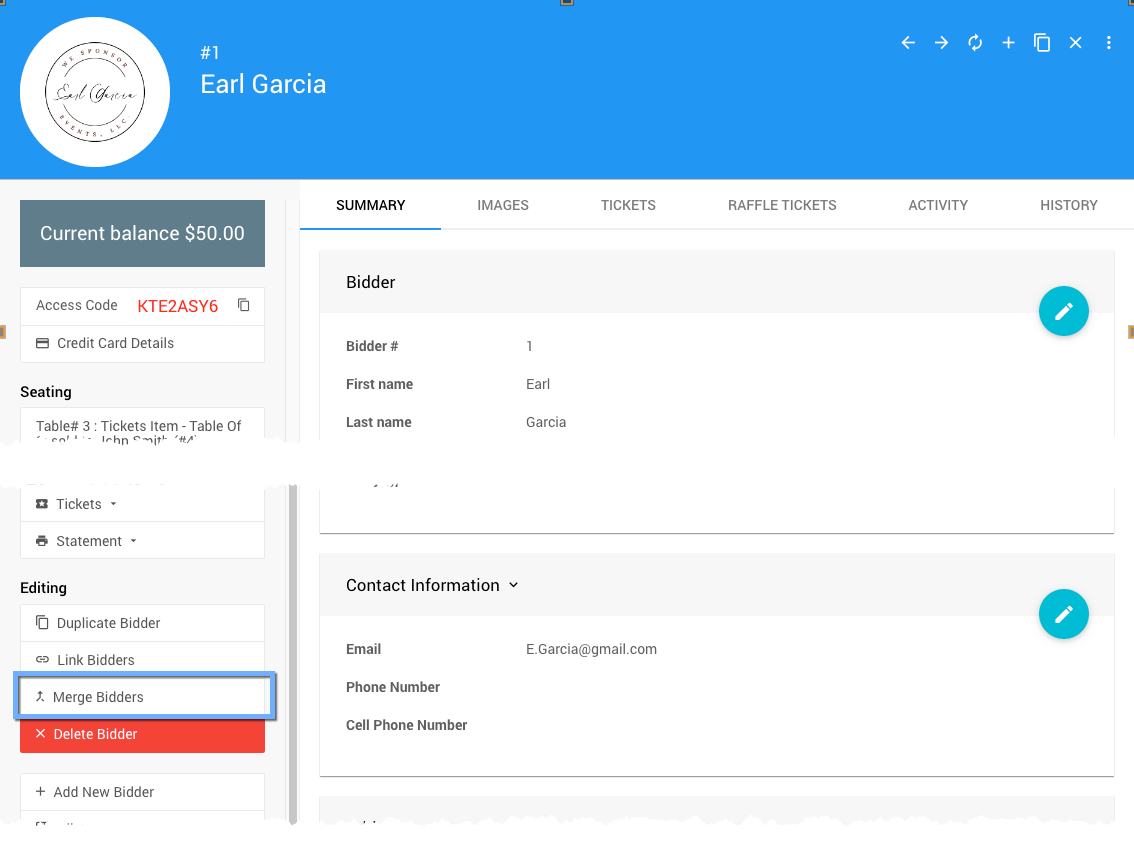 Selecting a bidder using the drop-down selector and clicking the Merge button will give a "Last Chance" confirmation to merge the bidders as this is a far-reaching and not reversible.

An example showing the final confirmation to Merge Bidders.